Get fresh music recommendations delivered to your inbox every Friday.

Too Fast for the Flames 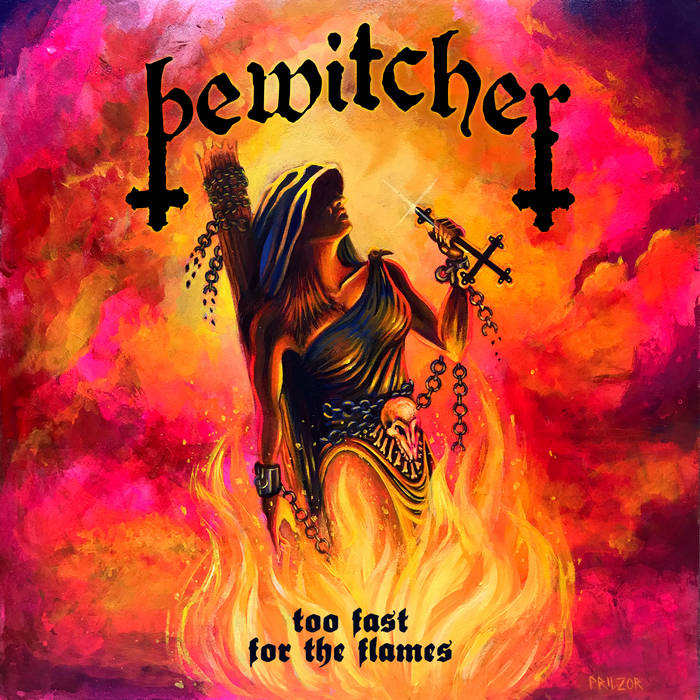 Largely the Truth, with Brennan Storr

Order "Too Fast For The Flames" now! Receive unlimited streaming via the free Bandcamp app, plus a high-quality download in MP3, FLAC and more.

The mighty Wheel of the Year has turned once again, and the Twilight of the Gods is nigh…

In 2019, BEWITCHER returns in conspiracy with Shadow Kingdom Records for their first release in over two years in the form of a new single, TOO FAST FOR THE FLAMES. This hotter-than-hell 7” is the first single offering from the highly-anticipated follow-up to their now cult classic self-titled debut. Fans of that record shan’t be disappointed upon first listen. “Too Fast…” features the same machine gun riffing, poisonous vocals, and locomotive rhythm section that the band has become infamous for. Proudly defiant in its lyrical slant and expressing zero interest in shame or regret, it is a true declaration of decadence.

The new release also marks another milestone in the band’s career by spawning its first official music video (shot by Wes “Craven” Cueto for Breaker Films and edited by Tim Burgess). Backed with a savage cover of the classic W.A.S.P. B-side “Show No Mercy”, this fireball of searing wax is but a taste of the hellish dealings yet to come. Having spent most of 2018 setting city after city alight in the U.S. and Canada, honing their Satanic magick attack to a katana’s edge, Bewitcher have now set their sights on the rest of the world. From its fiery artwork (drawn and painted by Andreas Magus & Prilzor respectively), to the infernal sounds contained within, Bewitcher are back from hell to strike your heart with deadly speed! Satanic Speed Metal always prevails when it’s TOO FAST FOR THE FLAMES!!

Recorded at The Captain's Quarters in Ventura, California by Armand John Anthony in June/July of 2018.

Mixed and mastered in August of 2018 by Joel Grind.

Artwork by Andreas Magus and Prilzor.

HEAVY METAL AT THE SPEED OF SATAN.

Bandcamp Daily  your guide to the world of Bandcamp